The Secret Lives of Fish #3: The Halibut Bushwhackers

Pacific halibut are a highly prized gamefish due to their fantastic taste. They can be caught from the beach and have been known to lie on the sandy bottom less that 30' from shore. A legal size halibut in California is 22", which is about four pounds. After being filleted, the resulting three pounds of meat goes for about $30 per pound, or $90. Not bad. 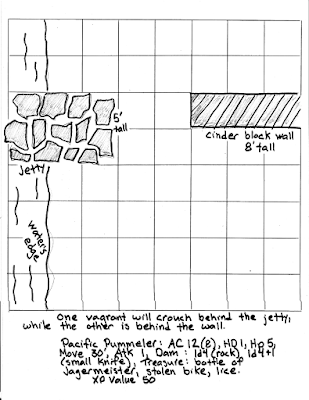 In Los Angeles the homeless population is growing at an alarming rate, with many finding their way to the beaches. While most are down on their luck, harmless individuals, others are less so. A halibut is a tasty meal that can be easily monetized, so some felonious characters have taken to lying in wait for lone fisherman with a stringer of thick halibut. After a flurry of blows, the fisherman yields his catch and the rogues slip away into the night.

The battle mat at right can be downloaded and printed out on an 8.5" x 11" sheet of paper. It is combat ready with stats on the bottom. Place your lone surf fisherman on the mat near the water's edge, with the pacific pummelers behind the wall and jetty.

The combat need not be fatal. No one needs to die over a fish. Some rogues might be aware that fisherman must carry their license along with ID. An ID is carried in a wallet and a wallet means money. So perhaps the pummelers will try to snag a wallet in addition to a meal.

Email ThisBlogThis!Share to TwitterShare to FacebookShare to Pinterest
Labels: The Secret Lives of Fish