Devon looked around the well-lit tavern room and lifted his mug of Basilisk Ale to his lips, paused, then put the mug down. Glancing briefly at the empty chair next to him, he turned to his two companions seated with him at the table.

Aithne of Far Isle said nothing while Apris the Wonderous bowed her head and weeped silently.

Devon thought back on that day ....

The door to the cabin exploded inward and a bedraggled and dirty trio surged in. Aithne of Far Isle, with her bow held ready and an arrow nocked, quickly swept the sparse cabin, seeking the old man who sent them into that deathtrap below. Devon supported a near-unconscious Apris, dragging her into the cabin and placing her gently on the rough cot.

"He's not here," said Aithne, as Devon secured the door and set about lighting a fire in the fireplace. A quick search found the disguise that the man had used and the clay jar of coins that, when counted out, was only 3 gold.

Aithne shrugged and said nothing. The gold inlaid stone that stretched across the floor of the exit tunnel had somehow prevented the ghouls from following them but there was no knowing if Abel made it that far.

Apris stirred on the cot as the paralysis from the ghoul's touch was starting to wear off. Devon moved to her side and started bandaging her wounds. She turned her head away from him and began to softly cry.

Aithne looked grimly at the pair and said "We've got a man to find and kill. Slowly."

They had spent a week recovering in the cabin but saw no sign of the man or of Abel. They spiked the stone door in the cellar shut and painted warnings on it in as many languages as they could think of or remember. Hopefully that would keep out any curious folk. At least until they were strong enough to return and find their friend's bones and finally destroy the ghouls below.

With no leads and few prospects, they started the search. Two weeks later, still nothing. Devon pounded the table. NOTHING! Surely someone knows something! And that 3 gold was spent long ago. They could barely afford the ales before them and definitely not any dinner.

While the trio was deep in their thoughts, an old man stepped in front of their table. He rapped his knuckles on the rough wooden surface, bringing them out of their reverie.

"Drunk or asleep?" the old man gruffly asked. When he got no response but dull looks, he took a seat in the empty chair. Abel's chair. The furious look on Aithne's face did not deter him or he, just as likely, failed to recognize ready murder less than an arm's length away.

"You're strangers here, ain't ya? And adventurers?" he continued, "Have you eaten? Looking for work?"

Devon cleared his throat and said thickly "Uh, yeah. Work ...." Surprisingly, Apris responded clearly "Sir, we are looking for work and we are hungry. Buy us a meal and we'll hear your tale." She calmly put her hand on Aithne's arm, a gesture which, a few short weeks ago, would have never happened.

"I've got a private room over there. Let's repair to it and you'll have your meal. And your tale," said the old man, standing up. "I'm Burke, Burke Linderstead, by the way. The mayor, sheriff and miller of Westfield. Come along."

Once in the room and with steaming plates of food and filled mugs in front of them, Burke told the adventurers "We've got a grave robber and that black heart stole my daughter's body. Her name is Sara and I want her back and I want to know who hired the robber. I want justice! And you, my friends, are going to get it for me." 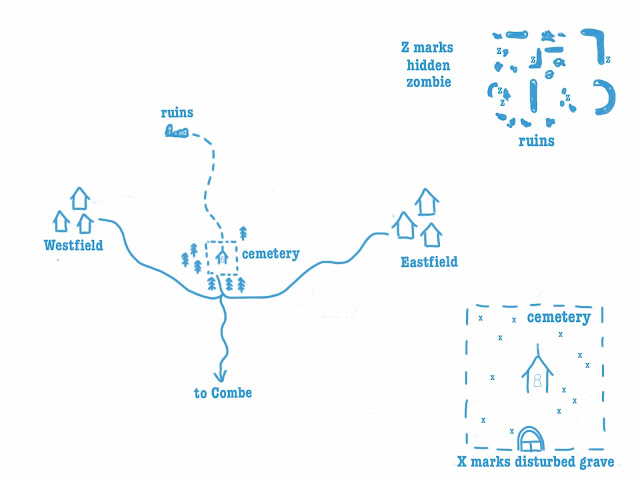 The thorpe of Westfield has a problem. Someone is stealing their dead from the small cemetery that the village shares with their neighboring (2 mile distant) village Eastfield. So far, only Burke Linderstead, the miller (and nominally mayor and sheriff), suspects the truth. While he has no definitive proof (he hasn't raised the alarm, yet), he's pretty certain that his daughter's grave was plundered and, as he's spent some time in the cemetery, realized that her grave wasn't the only one robbed. Not only Westfield's graves, but some of Eastfield's have been robbed, too.

He has no idea who the grave robber is but figures he's a local. He doesn't know how long it's been going on but guesses that it's been over a year. Not wanting to make wild accusations, and fearing that he'll be thought a grief-addled crack-pot, he wants the PCs to investigate for him. He'll pay them well but wants the culprits returned to Westfield for justice (and the corpses for proper re-burial).

Burke tells the PCs that there is a funeral tomorrow, the Widow Gainnes, and he believes the thief will strike tomorrow night. He wants the blackguard caught but he also wants the man responsible for it, too, so he's OK with them chosing their methods, either capturing the grave robber to question or following him to the trade point.

The cemetery is located between Westfield and Eastfield, about a mile from each village. The cemetery contains a small shrine to the spirits and there are several stands of trees around which will provide cover.

Burke takes the PCs to the cemetery and points out the graves he believes were disturbed (about 12) but there is little to discover, except that the new grave for the widow is freshly dug and waiting for tomorrow. The grave was dug earlier in the day by several Westfellian farmers, none of whom are involved in the robberies.

Burke offers the PCs a fairly comfortable night's stay in his mill, as it will be easy to slip out unseen from the rest of the village when they go about their business.

At the funeral the next day, if the PCs attend, there seems to be no ready suspect, just a bunch of grieving people. Assuming the PCs stake out the cemetery that night, they catch the grave robber, Merrick, in the act.


If the PCs capture and questioned Merrick as to who hired him, that trips the Hidden Message spell (Iridia #28) that Merrick has been carrying with him for these many months. The Hidden Message simply states "So you're interested in who this worm works for? Fools and meddlers! Come seek me at the ring of ancient standing stones three leagues north of Toril's Grove on the eave of Midsummer and earn your doom!"

Whether the PCs capture him to interrogate or follow him, Merrick leads them to a nearby ruin, where he waits for his buyer. The buyer, however, does not show up. Instead, an undead trap is sprung! 6 zombies rise from the ruins and attack!


Assuming the PCs are victorious, they've got one prisoner and 6 corpses. The zombies were from the cemetery and, while pretty badly hacked, are gratefully welcomed back by their kin for proper re-burial. Burke's daughter Sara isn't among them but the PCs still earn their reward. The rendezvous with the mastermind behind this evil scheme is left to the GM to determine.

Devon's short sword bounced harmlessly off the zombie's tough hide as he ducked under his opponent's outstretched hands, narrowly avoiding being grappled and crushed to death. Around him, Apris was casting her magic and Aithne of Far Isle was firing arrows as fast as elvinly possible into the zombies, while that useless rat-faced coward Merrick was curled up into a ball, screaming like a little girl. Things looked pretty grim!

Then from the darkness, a howling battle cry cut through the night and Abel Artone lept into the ruins, sword flashing in the torchlight, chopping one, then another of the zombies down. The shock of Abel's appearance even caused the zombies to pause briefly but soon the combat renewed.

Soon Abel and Devon were fighting back to back against a pair of zombies. Devon, bewildered by his friend's sudden and unexpected resurrection, focused hard on the enemy before him - after all, even with Abel here, they could lose! When the last zombie dropped, the trio turned to their good (and alive friend) Abel, and mobbed him.

Abel raised his hands "Peace, peace! Let me tell my tale! I made it out of the ghoul's nest, I don't know how, but I was found by a friendly hermit who (with his mountain lion companion) patched me up and took care of me for two weeks. By the time I made it back to the cabin, you were gone, so I've followed you since. I arrived in Westfield late tonight and when I asked around, Burke told me where you'd be. I followed that one screaming" he continued, pointing to Merrick, "and here I am!"

Turning to Apris, he handed her a wand and said "I'm sorry I frightened you but I hope this makes up for it. I found this trifle in the ghoul's lair. Perhaps it's useful?" Apris squealed with joy - a Wand of Magic Missile!

Gathering up the prisoner, they soon were on their way back to Westfield. Devon looked at his friends and smiled. "We came for a corpse," he thought, "and found one of our own, alive!"